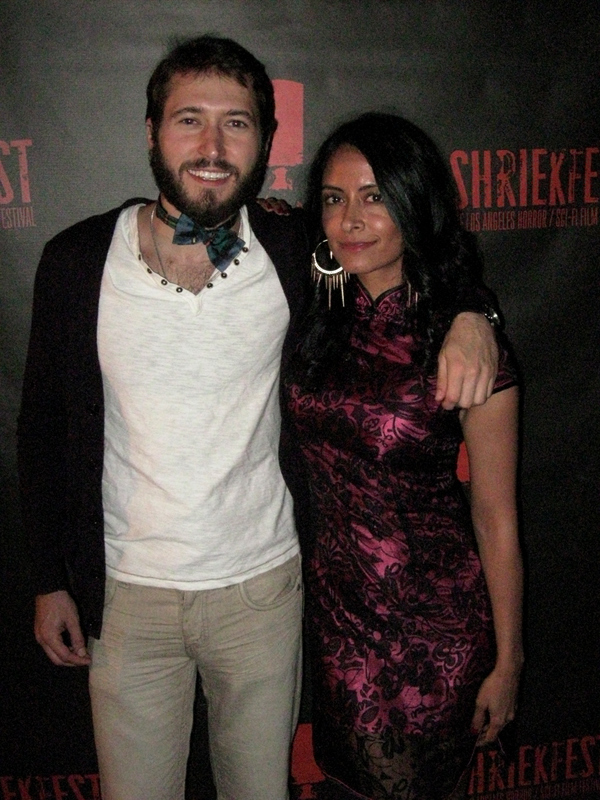 The past few weeks have been a bit hectic, to say the least. We hit Shriekfest in October, armed with business cards, postcards, posters, press kits burned to DVD, and hope. What a fantastic time!

BTW: This is when getting your shit together – website, business cards, poster art, postcards, DVDs, presskits, etc. – really pays off. If you have your materials together ahead of time, getting things to the printer and/or festival on time shouldn’t be too difficult or expensive. If you have to prepare everything at the last minute, expect to bleed sweat, tears and money.

Here are some highlights and observations on Shriekfest:

We saw three days of great features and shorts. Friday night was predominantly a horror evening. The standout performance was Marta Milans’ in Devoured (dir. Greg Olliver). The film itself is pretty cool – not about cannibalism (in case you were wondering) but about a mother who’s trying to save money for her son’s operation, while working a tough job cleaning up at a restaurant, and staving off creepy guys, difficult bosses, and a lot of fear.

I confess I didn’t catch all of day 2’s films because I went out with MacLeod Andrews, his parents Jack and Matilda, and his awesome friends for dinner (thanks to MacLeod for organizing this). There were some really fun shorts – Blackout (dir. James Bushe) is about a group of safecrackers who take advantage of an alien-caused blackout to rob what looks like an antiquities warehouse. But they get more than they bargained for. It manages to be scary and funny at the same time.

She’s Having a Baby (dir. Chris and Robert Smellin) and Stay At Home Dad (dir. Andrew Kasch and John Skipp) were both pregnancy-themed shorts. She’s Having a Baby is about a woman who decides to kidnap men and use them as sperm donors. Stay at Home Dad is about a dad who decides to undergo an experimental breast implant treatment so he can stay at home and feed his daughter while mom goes off to work. Both are funny, while also highlighting just how terrifying parenthood (and children) can be.

The Sleepover (dir. Chris Cullari) was based around a wonderfully zany idea: is the baby sitter making it all up about the monsters under the bed, or is she for real? Two kids are about to find out at their first sleepover.

On the flipside, Survivor Type (dir. Billy Hanson), based on a Stephen King short story, has to be one of the most squirm-inducing films I’ve seen in a while. A successful, come-from-humble-origins surgeon, with a nice side heroin dealing side business, has landed on a tiny, barren island following a cruise-ship disaster. He has a couple of sharp utility knives, water, and some assorted items in his pack – but no food. What do you eat when the only consistent food source is – yourself? Yup… it’s told in video diary format, which is, finally, perfectly organic to the story AND the character.

More shorts! Firelight (dir. Simon Brown) stood out. It’s about a post-apocalyptic landscape where aliens hunt by night, and human scavengers hunt each other by day. It’s notable for conveying the apocalypse in a very believable, smart way, on a tight budget.

In fact, that’s something I have to say about ALL the films I saw – everyone squeezed the last drop out of every dollar spent. Budding indie filmmakers should go to Shriekfest just to study how to do good stuff on a shoestring.

Another standout was the Poe adaptation The Tell-Tale Heart (dir. Bart Mastronardi), which updates the classic story to a mid-50s setting, switches genders around, and manages to convey the poetic soul of the story while being its own creation.

And of course, as a Star Wars fanboy (of the good ones), I have to give props to A Light In The Darkness (dir. Fed Wetherbee), which is better by far than anything George Lucas has done since Return of the Jedi. Set on a small mining colony that’s coming under the Imperial thumb following the assassination of the Jedi, the story follows a young boy who grows up believing that if he can just shine the right light, the distant rebellion will take notice and lend a helping hand.

Last Kind Words (dir. Kevin Barker) was really interesting. It’s a ghost story that has real heart, about a teenager who moves with his down-on-their-luck family back to their family farm (now owned by a hard-to-read family relation, played wonderfully by Brad Dourif). There he falls in love with a neighbor girl – or is she someone/something else? It’s tender, has a great sense of location, is well-acted, and moves in ways you don’t expect it to.

Nailbiter (dir. Patrick Rea) also took me by surprise. It’s a family drama, framed by a disaster, stuffed in the middle of a monster movie. A mom and her three daughters, all going through some tough issues, brave a tornado to meet dad when he comes back from Iraq. But they have to flee to shelter in the basement of a house, whose owners are… something unexpected. If this sounds ambitious, it is, but the film succeeds overall with winning performances, good writing, and people doing smart things (as opposed to splitting up/wandering off/running exactly the wrong way).

Thank you so much to MacLeod Andrews, Mina Vesper Gokal, Jack and Matilda Andrews, Stephen Bradbury’s sister and cousins, MacLeod’s friends, Mina’s boyfriend Faizan, all for coming out to the screening. We went out afterwards to a lovely place (Blue something-or-other, wasn’t it?), drank, traded stories, and ended the evening with karaoke and Wendy’s. Awesome!

One of the reasons I love going to Shriekfest is ’cause I love the company – Denise is a terrific organizer, and she sets the tone: everyone is supportive of each other, the filmmakers forget to be competitive and simply become fans. Big shout-outs to the fellow screenwriters, directors, composers, and actors who came out in support of horror, sci-fi and fantasy goodness, whether you had stuff in the fest or not.

Some quick shout-outs to Cafe Gratitude, just south of Melrose on Larchmont – a vegan cafe with awesome breakfasts, cool staff, and some great desserts. As someone who loves to make fun of vegans, I confess I was swayed (at least for a while). I also have to mention Cactus Taqueria, on Vine just off Barton – great 3AM food; and Nat’s Thai Food, just around the corner from the hotel, on Vine north of Santa Monica Blvd. A big-ass bowl of spicy Massuman curry, rice and Thai iced coffee set me back less than $10.

NEXT WEEK, we review the Eerie Horror Festival experience (in Erie, PA) – with sweetheart Debarati Biswas and DP Ben Wolf! 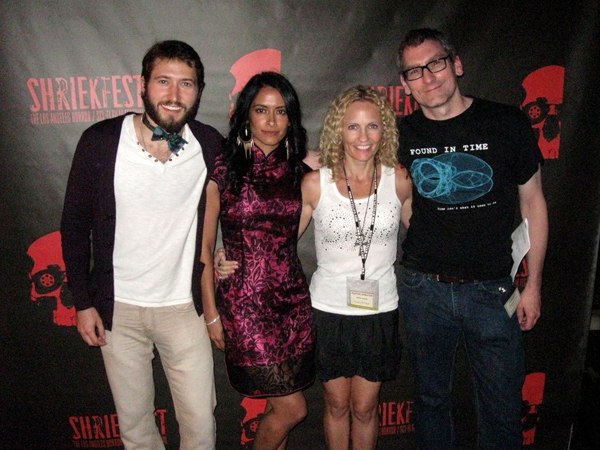 We won the Best Sci-Fi Feature Award at Shriekfest last night! Congratulations to the cast, crew, crowdfunders, family, friends, supporters, loved ones and pets for your help, patience, and love these past years. This is just the beginning! This coming Saturday, October 13th, at 2pm in Erie, PA, the film will have its East Coast premiere at the 8th Annual Eerie Horror Festival. See you there Some photos of Shriekfest are on our Tumblr page, and stay tuned for interviews and more info! Congratulations also to our fellow winners and finalists – we had a great weekend watching some really cool films!

Found In Time will have its world premiere at the 2012 Shriekfest Film Festival, in Los Angeles this October! The festival, now in its 12th year, has been rated as one of the ‘Top 25 Festivals Worth the Entry Fee’ and ’25 Festivals To Die For’ in MovieMaker magazine, and ‘LA’s Most Successful & Entertaining Horror Film Festival’ by LA Weekly. We’ve been to this festival before, and can vouch for how much fun it is. Here are the details:
Web: www.shriekfest.com
Where: Raleigh Studios, 5300 Melrose in Hollywood, CA
When: Saturday, October 6th – 8:45pm, but stick around for the rest of the fest if you can, there’s sure to be some great stuff screened there

Thank you to the good folks at Shriekfest, and particularly to Denise Gossett and Todd Beeson, who’ve run a classy, filmmaker-friendly operation from day one! Check back here periodically, as we post updates on who from the cast and crew will be there. Arthur Vincie, writer/director, will be in attendance.