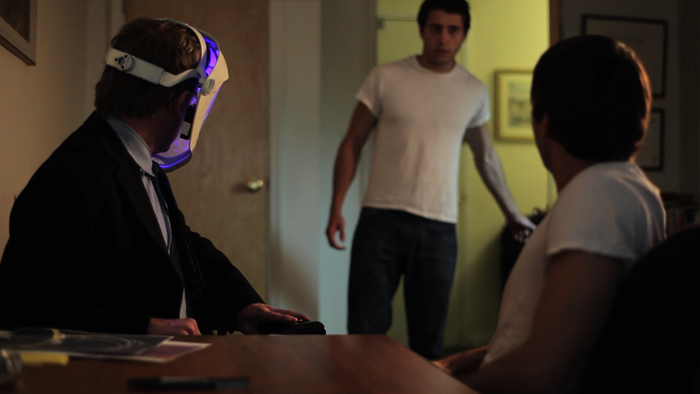 Quick Self-Promotion: I will be teaching a three-part course on Visual Storytelling at Brooklyn Brainery! The course looks at the tension between showing and telling in films. The first session will focus on existing films. During the second and third sessions, students will bring in works-in-progress (films, scripts, poems, novels, etc.) and discuss ways in which they can show their stories.

Make Time For VFX in Production

After Dan Loewenthal and I had scanned through the film a few times, and discussed/vetoed/decided on a few tweaks, we figured it was time to lock the picture. Up to that point, I’d put together some very rough visual effects shots, just so we had something to look at, and to give me some idea of what I wanted. I figured that few, if any, of these attempts would survive through the end of post (though a couple did). The VFX shots came in three basic flavors:

What I’ve learned is that I have to pay more attention during production when setting up VFX shots. Ben Wolf, my DP, is really good at setting up and executing low-budget VFX. But I rushed through the process a bit, creating more work for Vickie later. A good example is of a composite shot called "Two Chrises". In the foreground plate, we had Anthony (left) and Chris (right) arguing, then turning around as a second Chris enters the room.

There are several problems with this shot. First, foreground Chris moves into the area that the background Chris occupies. If you’re going to shoot a shot like this without using a greenscreen, then keeping the layers separate is pretty important. Second, the lighting from outside changed slightly between shooting the foreground and background plates, so Vickie and Verne Mattson, our colorist, had to spend more time in post evening up the shots.

Ben did a superb job framing and executing the shot. And the actors’ performances were great – MacLeod Andrews (Chris) and Eric Martin Brown (Anthony) are, after all, reacting to someone who literally isn’t there, and they sell it. The problem is that I didn’t schedule enough time to proceed just a little more slowly and make some minute adjustments, so we had to rush through the shots.

On the other hand, this shows you what you can do even without a lot of money or a greenscreen. We could have tried setting up a portable greenscreen, but placing it far enough away from the actors and lighting it properly may have been very difficult in that location (it was a small office).

Regardless of these oversights, Ben, Vickie and Verne were able to put together a wonderful shot. Dan Loewenthal, the editor, broke it up into two pieces and put a reaction shot by foreground Chris in between, to heighten the impact of the shot.

I am not affiliated in any way, shape or form with DropBox. However, I totally swear by it. It is worth it to upgrade to the Pro Version ($10 a month). With Vickie in Queens, Quentin in Brooklyn, and Verne in New Jersey, it would have been very inefficienct for me to shuttle files back and forth. YouSendIt is a great option for sound files (Quentin and I used it a few times) but for video files, DropBox is key. It works like a virtual hard drive that synchronizes a directory on your hard drive with its online counterpart. Stick a file in your local Dropbox directory, and it will be uploaded. If you give other people permission to see your account, they can download it. No more shlepping drives and DVDs back and forth.

After the picture edit is done, you should go back to your script and amend it to reflect the locked cut. You’d be surprised how many differences there are between what you wrote and what was said on set, and between that and how it was cut together. I found little chunks of dialog had been added, others taken away, and some bits rearranged within the same scene. Presenting an amended, as-edited script to your sound designer will help him/her out immensely.

You Can Never Have Enough Drives

I started out with a 2TB internal drive and a 500Gig Camera/Sound Master drive. Since then I bought three 2TB external e-SATA/FW drive – one serves as a backup of the internal drive, a second is for Vickie (and contains everything) and the third is for Verne. I also purchased a second 500Gig "shuttle drive" which went back and forth with me on those occasions when I was meeting with someone had to grab a file from them or give one to them. I will need another 2TB drive pretty soon, to back up all the behind-the-scenes footage, the various QuickTime exports I’ve made, and the VFX final files. Since space constantly gets cheaper, I only bought new drives as a I needed them.

Okay, that’s it for now. There’s a lot going on at the moment – we’re in the process of building a new website for the film, and creating publicity/promo materials. I’ll have more to say about that next time.