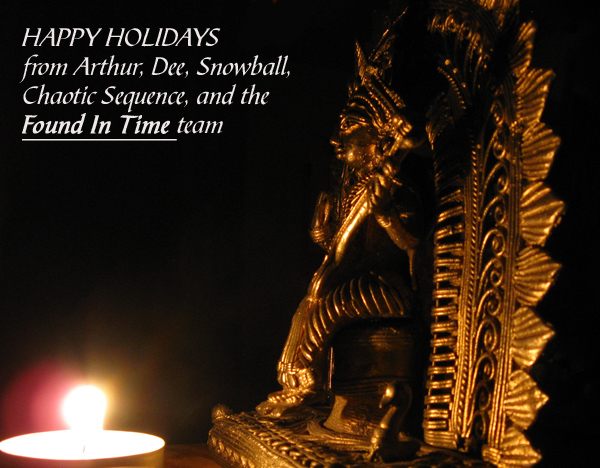 Happy new year to everyone! The year kicked off with a couple of great pieces of news: first, Found In Time had its New York City festival premiere at the Anthology Film Archives, as part of their ongoing NewFilmmakers NY program, on January 2nd. The attendance was a little sparse, but pretty damn good considering it was just after the new year and we were in the beginning stages of a really crummy winter storm.

Secondly, Preparing For Takeoff got a really nice review in Pro Video Coalition (PVC). Head over and read it if you get a chance.. PVC is a really terrific site, and features reviews, articles, tips, and news about the film and video world. It’s a great resource for indie filmmakers.

2013 was a pretty amazing year, by and large. It was a bit overwhelming at times. Found In Time played at nine festivals and got picked up for distribution. Along the way we created a seemingly endless amount of key artwork, for the poster, flyer, postcard, DVD slipcase, DVD cover, online ad, etc. Preparing For Takeoff, my book on preproduction, was also published in 2013. Promoting it to bookstores, conventions, review sites, indie filmmakers, and colleges took a while but was very rewarding. Somewhere in there I rewrote an older spec script, and started working on some new projects. Oh, and I started teaching a course on production management, something I’d never really done before.

One of the casualties of all this newness was the downtime I had two years ago when Found In Time was wending its way through post. It’s been harder to find time to reflect, exercize, and meet with colleagues and friends. I find that I miss it, and so one of my 2014 resolutions has been to carve out more downtime. It’s the only way to recharge and come up with new ideas.

The good and bad news is that filmmakers are finally waking up to what’s going on in their field, namely that they’re getting pushed into the same position that musicians found themselves in about ten years ago, and writers have been in for even longer. The demand for media of all types is rising, but the payoff for the media creators is getting smaller each year. That would be acceptable if the cost of living was manageable, but it really isn’t anymore. Education, healthcare, rent, food costs – pretty much all the necessities of life have become insanely expensive, even more so in the big cities that are often meccas for creative people.

The good news is that film folk are individually and collectively trying to do something about this. I’ve noticed a lot of camaraderie among filmmakers, and less competition. There’s been a growing awareness on the part of writer/directors of the critical role of the producer. I’ve seen crowdfunding take off in a really big way. Filmmakers have embraced (for better or worse) the idea that they have to think about distribution from the get-go.

The bad news is that marketing and promotion are difficult enough to do when it’s your sole job. When you’re also responsible for creating the thing you’re marketing, it becomes difficult if not impossible. To run your art as a business, you have to dedicate time to the following:

Each of these requires a different skill set, and a different type of concentration. The soft underbelly of all this is the art itself. After you’ve done all your social media work, fired off emails to friends, put together a little pitch document for your latest project, put the artwork together for your film’s postcard, and done some paying work (that’s hopefully film-related), how much energy/time/concentration do you have left to sit down and write your next script? Or even read your next script? And yet, people are doing it, often by forming small teams. I saw a lot of three and four-person “families” at the festivals this past year, and it’s a good sign.

THE FESTIVAL CIRCUIT, THE TV CIRCUIT

This past year marks the first in many where I think I spent more hours watching TV shows than I did actually going to the movies. I usually watch one show at a time, because that’s all I can budget for. This past year, however, I watched Game Of Thrones, Orphan Black, Breaking Bad, Walking Dead, and too many specials and webisodes to mention. This is a great time for television!

This was also the first year I saw more consistently awesome films at festivals than in theaters. I was terribly disappointed by most of the studio movies I saw in theaters, and even many of the so-called indie movies were just rehashes of various formulas with an “alternative” soundtrack. On the other hand, the films I saw at festivals – both shorts and features – were captivating, surprising, engaging, and entertaining, and managed to be all those things on shoestring budgets. Most of these films are going straight to DVD and digital.

This, frankly, sucks. The big screen still has a place in our culture, and it shouldn’t be reserved for high-budget dreck like Star Trek: Into Dumbness, or even enjoyable rides like Pacific Rim. Have we have become too enamored of spectacle, and identify it with the big screen too much? Can’t we still appreciate how wonderful it is to see a truly indie movie in a theater with strangers laughing, crying, clapping and oohing all around you? I remember seeing Francois Truffaut’s Small Change in an arthouse theater in upstate New York as a kid. It was as momentous to me as seeing Star Wars in the theater in the Bronx a few years earlier. There’s still a place for a theatrical release for really small films, but we may have to fight a bit to make it work.

Found In Time will be released this year by Green Apple Entertainment. Beyond that it’s hard to say what’s going to happen. We’re still looking at festivals, sci-fi conventions, and alternative theatrical venues for the film, and are contemplating a trip to the Cannes Marketplace to get acquainted with the woolly world of foreign sales agents. The future can be guaranteed to bring more change, at a more rapid clip that was thought possible. Here’s to a great year ahead. Let the adventure continue!