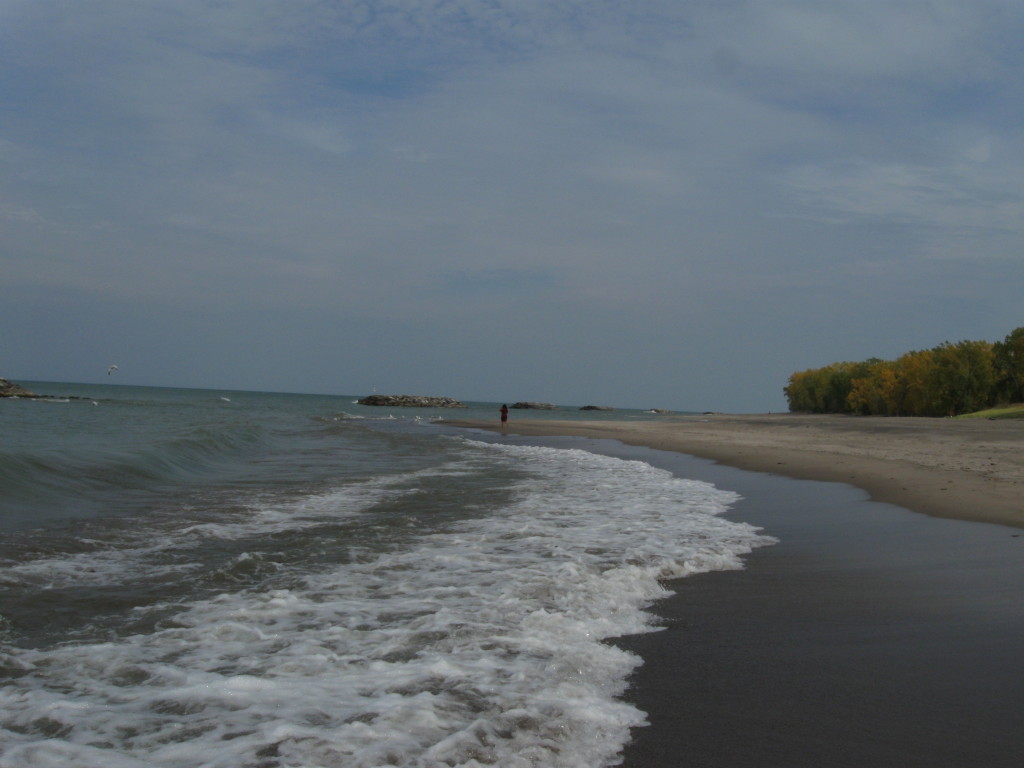 A day on the beach at Lake Erie.

It’s been a little over a month since our last blog post, and quite a busy one at that. We wanted to touch on a few things, but just haven’t had a chance.

So let’s go back a little bit, and recap our journey to Eerie Film Festival, in lovely Erie, PA.

First there was the issue of the postcards we ordered, which we (for better or worse) had printed the Shriekfest screening date/time on. It took a few hours to print out and apply stickers to replace the Shriekfest screening time with the Eerie one. In retrospect, it would have been better to have ordered two separate 500-count postcard runs, one with the Shriekfest info and the second with the Eerie info, instead of getting the single 1000-count run. You never hand out as many cards as you think you will, and at the end of it you’re stuck with cards that have limited value.

On the other hand, we’d made multiple Blu-Rays of the film a while ago, so we didn’t have to worry about losing our only one at Shriekfest. And we’d also burned some copies of the EPK to DVD, which proved rather valuable later on.

ON THE ROAD TO PENNSYLVANIA

The trip to Erie took a little more than ten hours each way. There were three of us – Arthur Vincie, DP Ben Wolf, and Arthur’s girlfriend Debarati Biswas. We had a couple of pit stops for food and bladder relief, and passed through some wonderfully scenic countryside. Of course we had to stop at the Twilight Diner on the way, for some coffee and dessert. The dessert and coffee were great; our only regret was having eaten too much at IHOP earlier, or we would have had dinner there.

Our first impressions of Erie, PA were that it was an industrial city that had seen better days. But it turns out that since it’s right by the lake, has three colleges in town, and is only an hour’s drive from Detroit, Buffalo, and Syracuse, the city has stayed afloat better than many others through tourism, culture, and education.

HOW ABOUT THE FESTIVAL

The festival wasn’t what I was expecting. The venue itself was magnificent – it was a classic movie theater, built during the golden age of Hollywood. It reminded me of the old RKO theater in the Bronx, where I first saw Star Wars as a kid. Even though I remember the RKO having a run-down look (it was shuttered a few years later), it still possessed a wonderful majesty to it, like a Broadway theater. The Erie theater had the same grandeur but had been maintained and restored, so it was a great place to see the film – on a truly big screen.

The screening of “Found In Time” itself was great. We had a smallish crowd, since it was early, but they made up for it with a terrific Q&A session afterwards. Big props to the folks from Slaughterfilm.com, who asked some of the best questions and then went on to do a really great podcast review of the entire festival (one ‘cast per day) and gave some nice mentions about our film as well.

We spent the afternoon munching food and beer, and hanging out with some of the folks from the fest, then went back in and saw Enchiridion, a really interesting period horror piece (it’s set in 1966), that’s hard to describe exactly. It’s about a priest who’s approached by a Federal Marshall to interview a captured vampire, and translate his “sacred” text. This leads down a lot of rather strange alleys. The film features some stop-motion animal puppetry that elevates the overall weirdness of the piece. Overall I have to say I liked the film, though I feel like it drifted a little in places.

Other films that were interesting were the shorts Lizard Girl, from South Korea, about a girl who seems to be running away from a group of horrible man-sized lizards. While this sounds bad, it’s not – it’s moody, well-shot and directed, and features some really good acting. I’m not sure if we’re supposed to take the lizards as metaphors for something else (criminals, businessmen, etc.) or straightforwardly as monsters, but they’re done well too.

We also liked the short film I Spyders, even though it might have gone on a touch too long. John is a cubicle slave who works long hours for crap pay, for Dave, an unappreciative jerk boss. Gee, I’m lucky I’ve never had a job like that. The one time Dave does something nice for John is when he offers him some grapes; however, a spider, hitching a ride to said grapes, climbs into John’s head. John is possessed by the multiplying spiders, but tries to manage his job until he gets his bonus, and keep from killing Dave.

The Mexican short film Shhhh might be the slickest film we saw. On the surface it’s a monster film, with a boy who’s afraid of an “imaginary monster” that of course is quite real. But the real monster is his sister, who bullies him about his “childish fears.” Until… well, it’s a great film so go catch it if you can.

There was a really good feature documentary that screened just before our film, Cryptotrip, which I started out being quite afraid of and ended up liking immensely. It’s a portrait of people who believe in and/or have seen strange creatures such as Big Foot, Loch Ness, and others (the title is a reference to cryptozoology). I was afraid the doc was going to treat these people as stupid or crass, or sensationalize the subject, but it actually takes their stories and research seriously. By and large they emerge as healthy, smart folks, who have found something that they can’t explain and have tried to cope with it constructively. 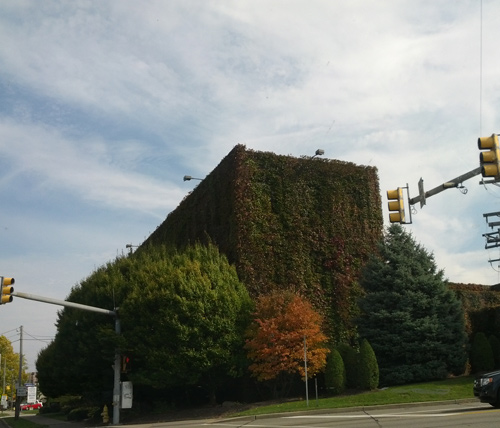 A cool building in Erie, PA

The screenings were the main, but not the only, attraction, of the festival. The lobby (which was huge) was filled with folks selling horror/fantasy/sci-fi themed t-shirts, videos, music, and jewelry. There were also some special guests from years past (including a good chunk of the crew and cast from Romero’s Night of the Living Dead and Dawn of the Dead) who were selling photos and autographs. We actually spoke with the lighting director from Night of the Living Dead, Joe Unitas, who was a really cool guy. He ended up staying for the screening and told Ben he liked the film. But this wasn’t a crass commercial enterprise – everyone who was there was really interested in connecting with other fans, talking about the local film scene, and just enjoying the films.

One of the standout vendors is PoetJoe Gallagher, who’s a poet, performance artist, and cool guy. He was selling t-shirts that featured roadkill on them, captioned with brief poems. While this sounds gross, it’s not – the animals are not treated as mere objects but as real creatures, who lost their lives tragically. The poems are like an ode to their spirit. His work, in a way, mirrors that of the festival in particular and of horror in general – there is a way of looking at the darker, more mysterious side of life that is neither exploitative nor condescending.

TIME TO HEAD BACK

Unfortunately, with a ten-hour trip ahead of us, we had to leave before seeing too much of the fun Sunday. We stopped in to say our goodbyes, dipped our toes in the lake (which was surprisingly warm for mid-October) and headed home. We stopped off at a couple of places on the way, including The Angelica Sweet Shop in Angelica, NY. Really good sweets and nice peeps.

Many thanks to the staff and volunteers. We had a great time and you ran a great festival! And it was great meeting so many filmmakers, fans, and artists. We’re definitely going to go back next year if we can – it was a lot of fun and it’s a great area. Arthur’s also thinking about shooting his next script there. Stay tuned for more news, and happy Holidays!